A year in the life of event transportation services

As 2018 is coming to a close, our team in event transportation services are getting a bit nostalgic. Providing event transport throughout the year is serious business, but we’re a cheerful group and like a bit of fun and banter in-between the hard work we all put in.

We usually look towards the next event transport job, but we thought it would be nice to take a breather and have a look back at the year that was (or as good as was in any case).

The year began with paying tribute to one of the most popular art forms of the event industry -ballet!

We proudly support Opera North, Northern Ballet, The English National Ballet and the Birmingham Royal Opera – just to name a few – with their ballet tours across the UK and Europe.

We felt it was fitting for us to take part in all the positive messages about ballet that were happening on the Twitter-verse and beyond. 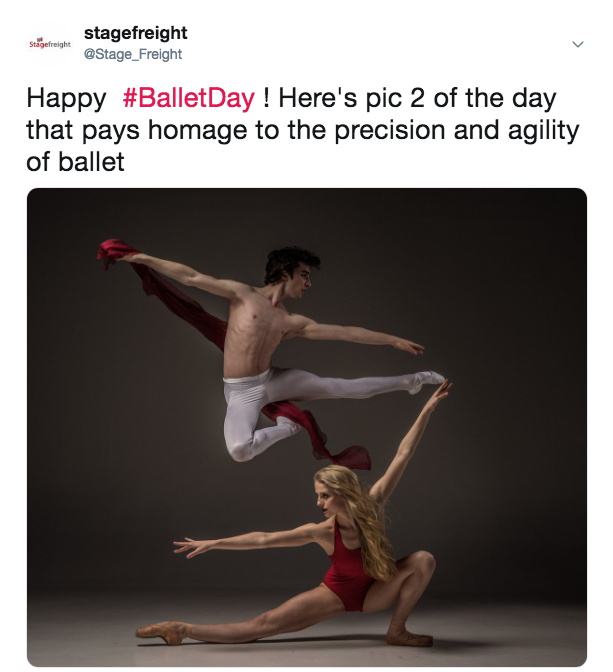 Beast from the East

A bit of a surprise – and minor hiccup – to our event transportation services was everyone’s favourite 2018 snowstorm that wouldn’t leave, the aptly named Beast from the East.

It was alright for some of the team though, as they were touring around Europe’s warmer climate like our own Ian Lowe, who was managing the Joan Baez music tour transport. More on his far too sunny pictures later on.

We and our friends at Universal Live firmly believe teamwork is the dream work, so we tag teamed it to free some of our trucks! That was snow mean feat… 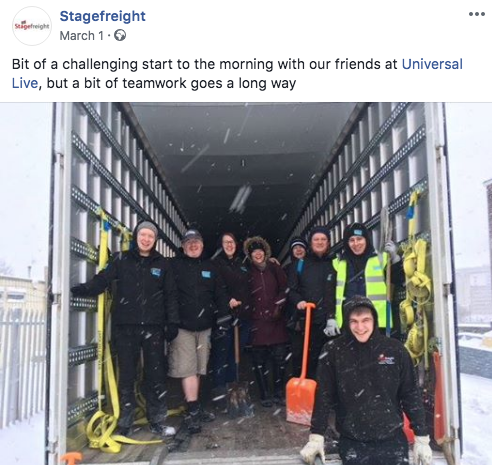 In April, we had some local visitors come for an exclusive behind-the-scenes view. We showed BBC Radio Leeds’ morning presenter, Richard Stead, around the warehouse and showed him some of our trucks too.

Richard and his producer, Jamie, were surprised by how much planning and prep is involved in our event transportation services.

It was nice to show BBC Radio Leeds around and we enjoyed swapping planning stories with them. 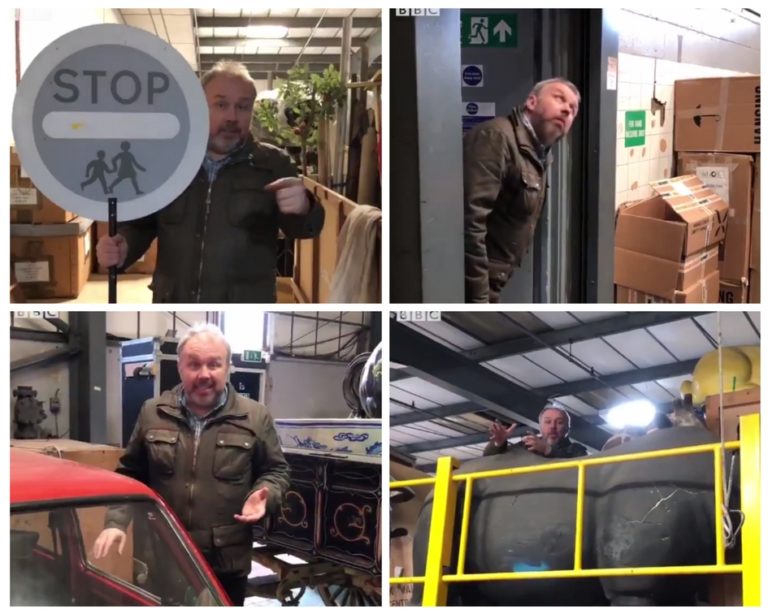 We introduced you to more of our drivers

You may have seen our driver profiles across our social channels. We often share what a great job our team does, as they’re a modest and shy bunch.

But we thought putting a face to the hard work would be a nice gesture to really show what a great job the team does throughout the year. 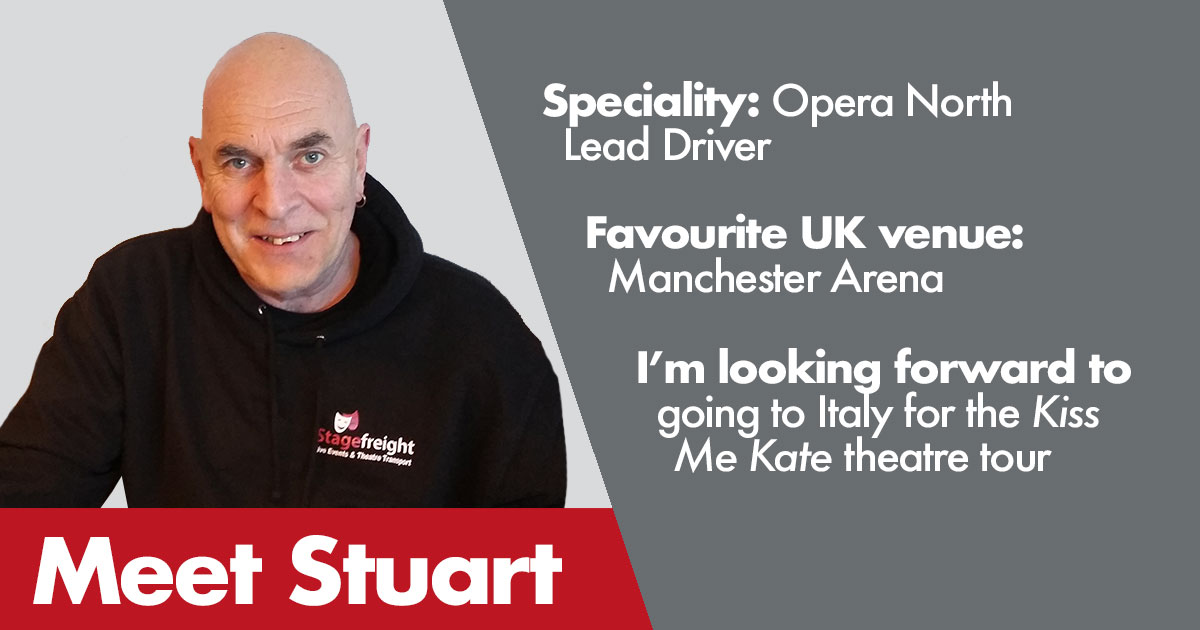 There will be more driver profiles to come once we can get ahold of the team again. They’re a bit busy with transport jobs this time of year.

There’s a misconception in the event transport world that all truck trailers are the same. However, our very own Chris designed Stagefreight’s urban trailers.

Urban trailers have the same capacity for equipment and props as our standard trailers, but they also have a more agile size for city roads and urban loading bays. It’s a win-win design that we’re very proud of.

Find out more about our urban trailers here.

It was a big year for the Kiss Me Kate tour team of Opera North and for the Stagefreight team.

In a world first, Kiss Me Kate took part in the annual Ravenna Festival in Italy.

The city of Ravenna champions the arts every year and it was a great honour (and well deserved) for the Kiss Me Kate team to be invited to join the festival for the first time in 2018.

It’s also a credit to the brilliant performance that the team completes every show. We were thrilled to help out with this tour.

This first outing in Italy for Kiss Me Kate was undoubtedly a triumph for everyone involved. Find out what was involved in the transport side of things in our Kiss Me Kate Ravenna tour case study.

Every year we team up with Halifax businesses and charities to put on Ramfest – a fun family festival full of games and music that also raises money for local charities.

The music is a mix of new and well known acts that always delight the crowd, as there’s such a positive atmosphere on the day.

If you’ve not had a chance to join us at Ramfest yet, keep your July free for 2019 as we’ll be celebrating 10 years of Ramfest!

We pride ourselves in being able to handle event transport of any size, shape or form. But a first – even for us- was the PR campaign we supported Michelle Sugar Art and Mr. Kipling Cakes with.

Back in July, a 7 metre tall sculpture of the popular Roald Dahl character, the Big Friendly Giant, needed to get from Kent to Primrose Hill in London by dawn.

Over 7,000 cakes that couldn’t be touched had be taken from Michelle’s studio to Regent Park. Not a problem for our team.

Watch the video of how our Ant gets this amazing sculpture from A-Z.

Our team gets around Europe quite a bit. We supported Lenovo UK at the annual IFA (Consumer Electronics Unlimited) conference in Berlin with their Tech Life ’18 event.

The lads on a music tour in Berlin took a moment to take this brilliant picture outside of Berlin’s Olympiastadion. 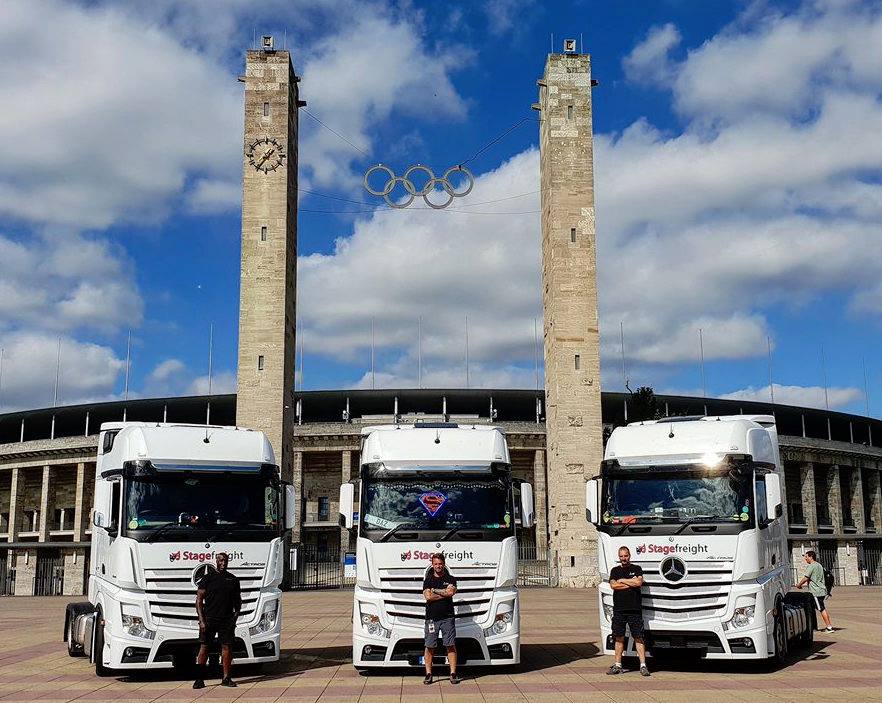 Then there was time for some sunshine in Malta, before a corporate event in Paris was calling.

Curious about the other places we complete transport jobs in?

Have a look at the most popular Europe routes of 2018 (coming soon).

Back in September, we ventured into the world of Instagram!

Be gentle with us; we’re more in tune with Google Maps than the world of hashtags.

We’re hoping to shake things up (in a good way) with our Trucks of Insta. 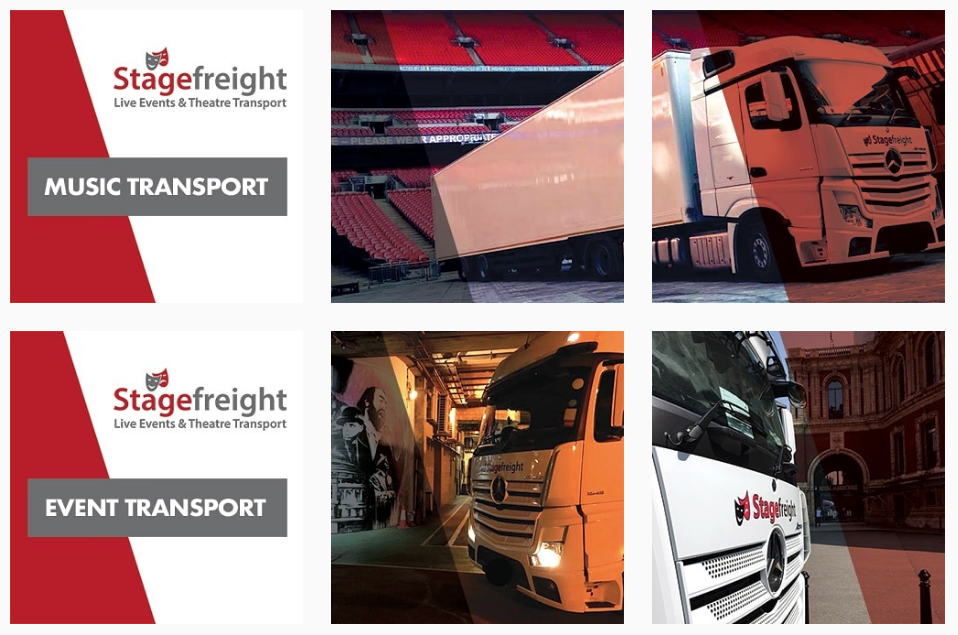 Are you following us on Insta yet?

It’s been a great 2018 all round and we’ve not just added people to our team, but more trucks and trailers too.

Here’s a quick lowdown of what’s been added to the team:

As you can see we’re well prepared to take on more event transport jobs in 2019. 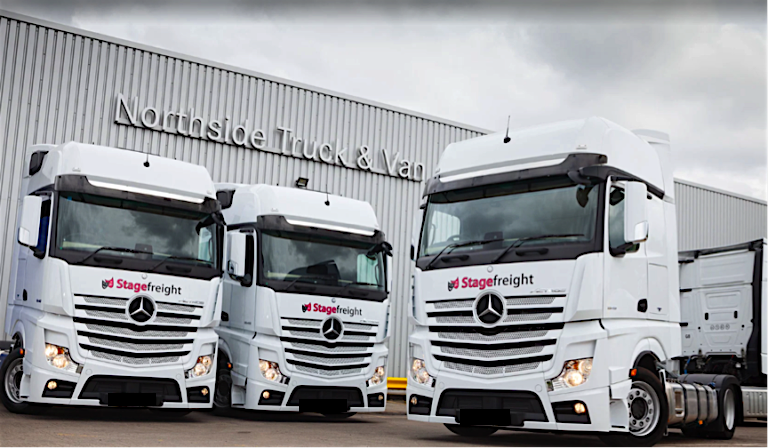 The famous and highly popular Joan Baez continues her farewell tour and we had a quick catch-up with the music tour driver, Ian Lowe, to find out how it’s been going.

Back in August Ian and Joan were in sunny Spain and had 58 performances behind them in 39 cities and towns. A total of 32,705 km completed alongside three amazing crew members, Chris Howlett, Sean Baddams and Steve Baddams.

Ian’s highlight remained working with the legend, Joan Baez, who in his words is the most approachable person ever.

We’re also quite pleased that some of our transport jobs caught the attention of our trucker community.

Did you know that Trucking Magazine and Truck & Driver both featured the BFG cake transport job we did on behalf of Michelle Sugar Art and Mr. Kipling cakes? 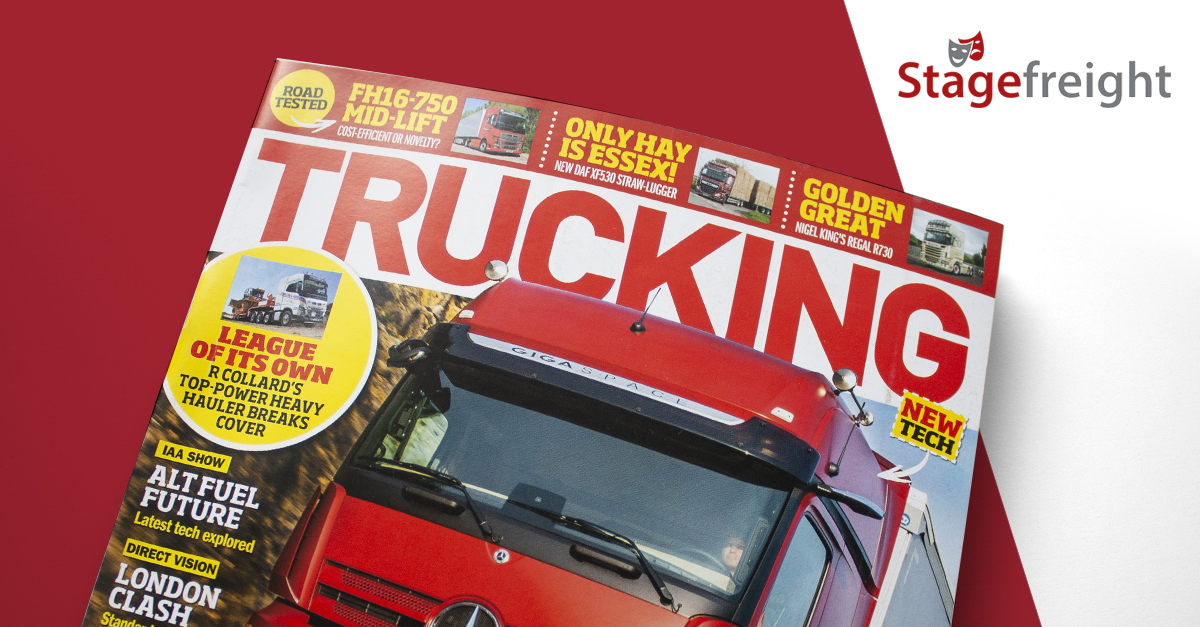 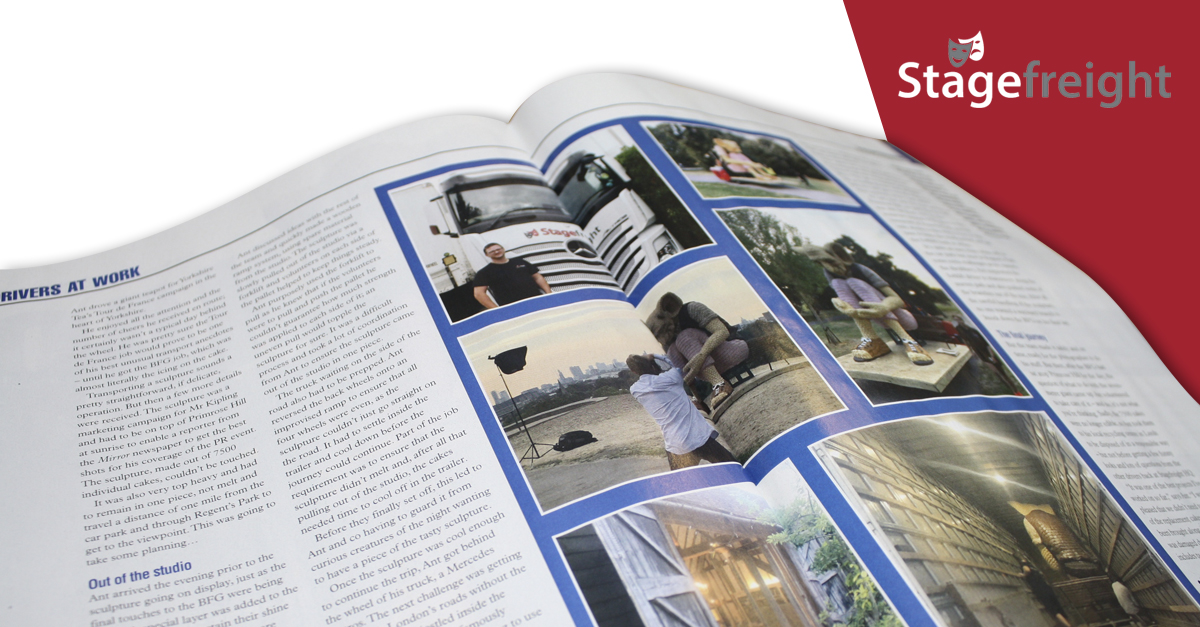 Just don’t tell our Ant, as the fame might go to his head.

What does 2019 have in store for event transport?

The show must always go on and we’re excited to get started with 2019!

Whether you’re after event transport, music tours or theatre tours, our team is ready to get you there in a fast and reliable style.

There’s something about stage transport