Meet more of the Stagefreight drivers

We’ve introduced some of the team in a previous article and it grabbed people’s attention.

So, we thought it was time to introduce more of the team.

Read on to meet more of the great Stagefreight drivers.

Allan Spencer has been driving for 23 years and stage trucking at Stagefreight for the last 18 years.

He’s the lead driver for Northern Ballet theatre tours and has been in this role for the last 2.5 years. 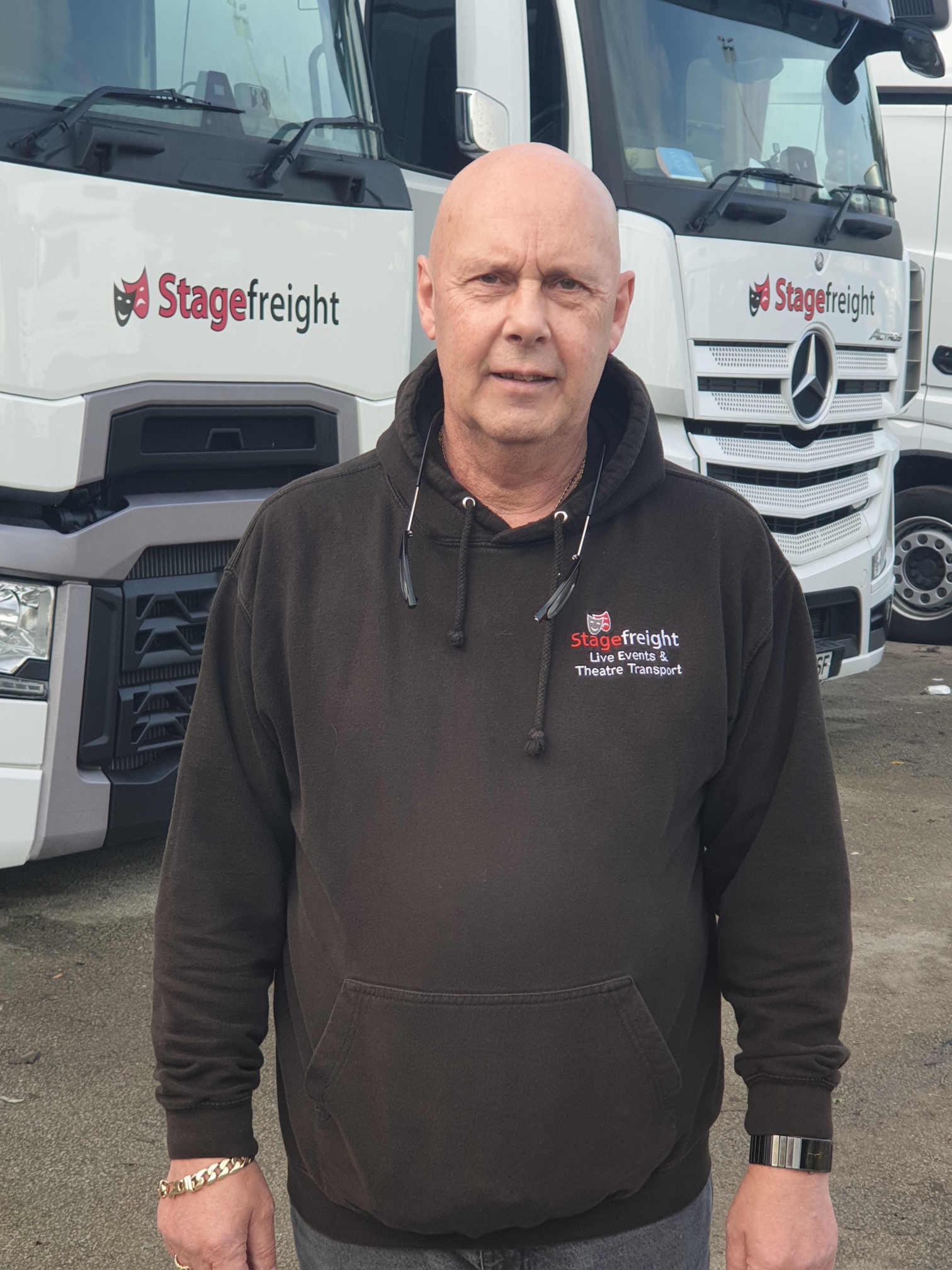 On average he’s on tour with Northern Ballet for 9 months of the year and leads a convoy of six to nine trailers across the UK.

The latest production was The Nutcracker that featured a stunning reindeer sleigh prop. And he’s excited about 2019’s brand new Victoria production.

In-between his Northern Ballet stage tours, Allan helps out with event transport jobs across the UK and Europe. One of the more unusual jobs was transporting some snowmen and elephants for an ice show at Blackpool Tower.

Over the years, he’s become well travelled across Europe. He’s been to Istanbul, Marrakech, Moscow, St. Petersburg, Berlin and many more popular European destinations. He also speaks a bit of German, which comes in handy on trips to Berlin.

When asked about destinations that defied expectations, Allan said he was pleasantly surprised by Moscow and St. Petersburg.

Allan recommends St. Petersburg as a holiday destination to anyone, as it’s such a fantastic place.

His tip to young drivers is to get a role with an entertainment transport specialist like Stagefreight. Stage trucking is one of the best jobs Allan has ever had.

There’s a great variety to the jobs, a lot of positive energy as clients are excited to see you and ready to unload the props. There’s always a warm welcome for Allan when he arrives at the theatre destination. As there’s often repeat tours with clients, Allan says that you can really get to know the client you’re working with. And if you get stuck in with the job you can be an extension of their team. You quickly become part of the crew.

Chris has been driving a Stagefreight transport truck for just 1 year, but already it’s the best job he’s ever had.

His main focus during the last year has been on corporate event transport. He’s not just been helping the Stagefreight corporate clients with their transport needs, but he’s also helped to set-up for the events too.

This can-do attitude and super-helpful approach has put Chris in high demand with the corporate event clients. Some of our top clients have asked for him to be their driver on future conferences and events too. That’s great feedback for a driver who’s new to the event transport scene. 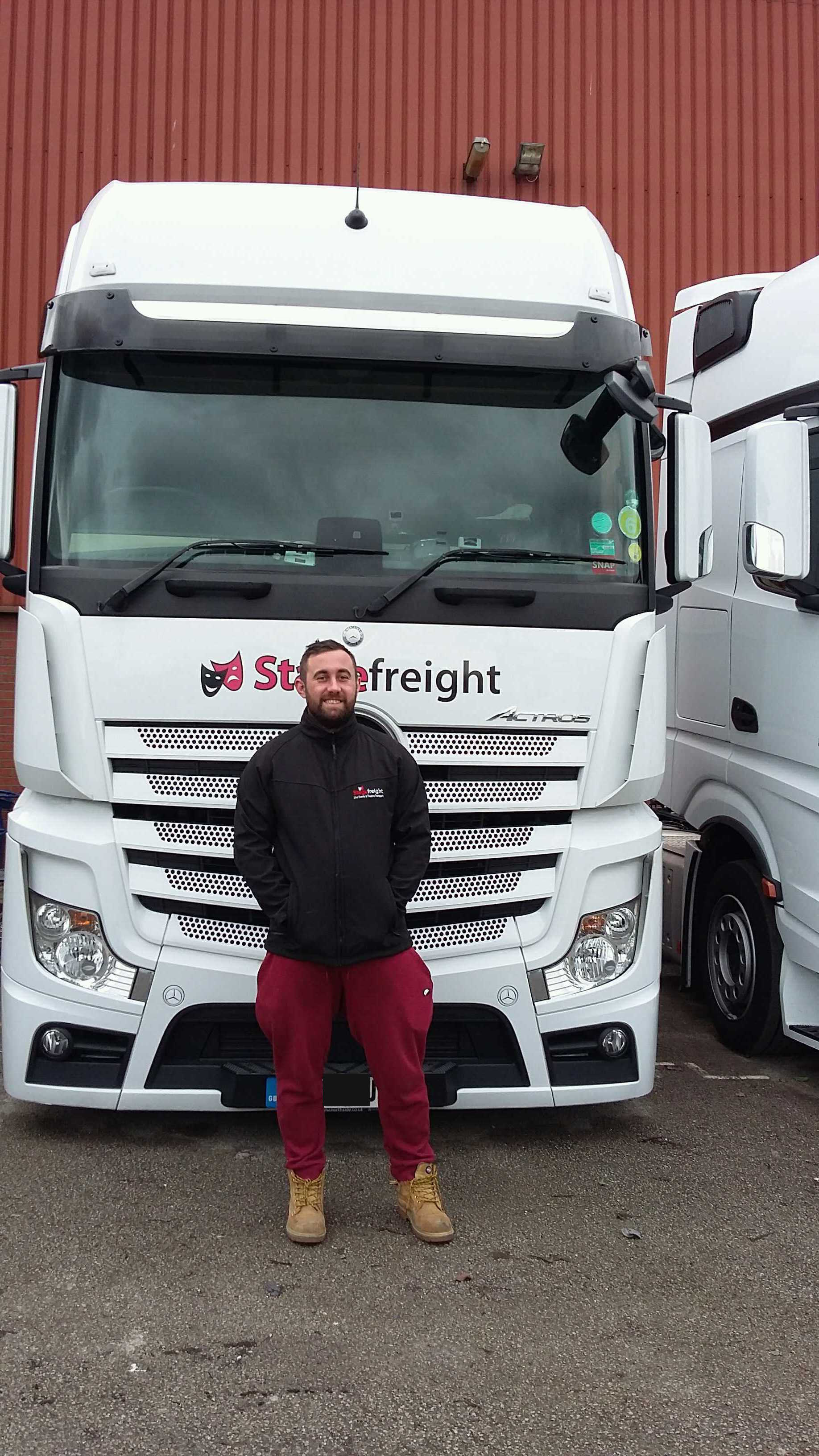 Chris has jumped into the deep end of the corporate event transport world, but is enjoying every minute of it.

In just 1 month he went to Madrid twice, and was pleased to be in the city centre as on his off-days he was able to explore this brilliant city.

He was also in Munich last winter, and got the chance to look around the German market near the airport, while he was there.

Chris’ very first trip though was to Ravenna, Italy. It was a 9-day trip with Opera North’s Kiss Me Kate Tour.

Find out more about this theatre transport tour in our case studies.

He was also on the team of the Boardmasters Festival back in August 2018. The annual festival near Newquay in Cornwall is an exciting event that combines live music with surfing, skateboarding and BMX competitions.

Since being a Stagefreight driver Chirs has also toured with some big music names. For a month and a half he helped out on a music tour for one of America’s most popular solo artists.

Paul Garfit is the lead driver for English National Ballet. He’s been driving for about 17 years and has been part of the Stagefreight team for roughly 12 years. 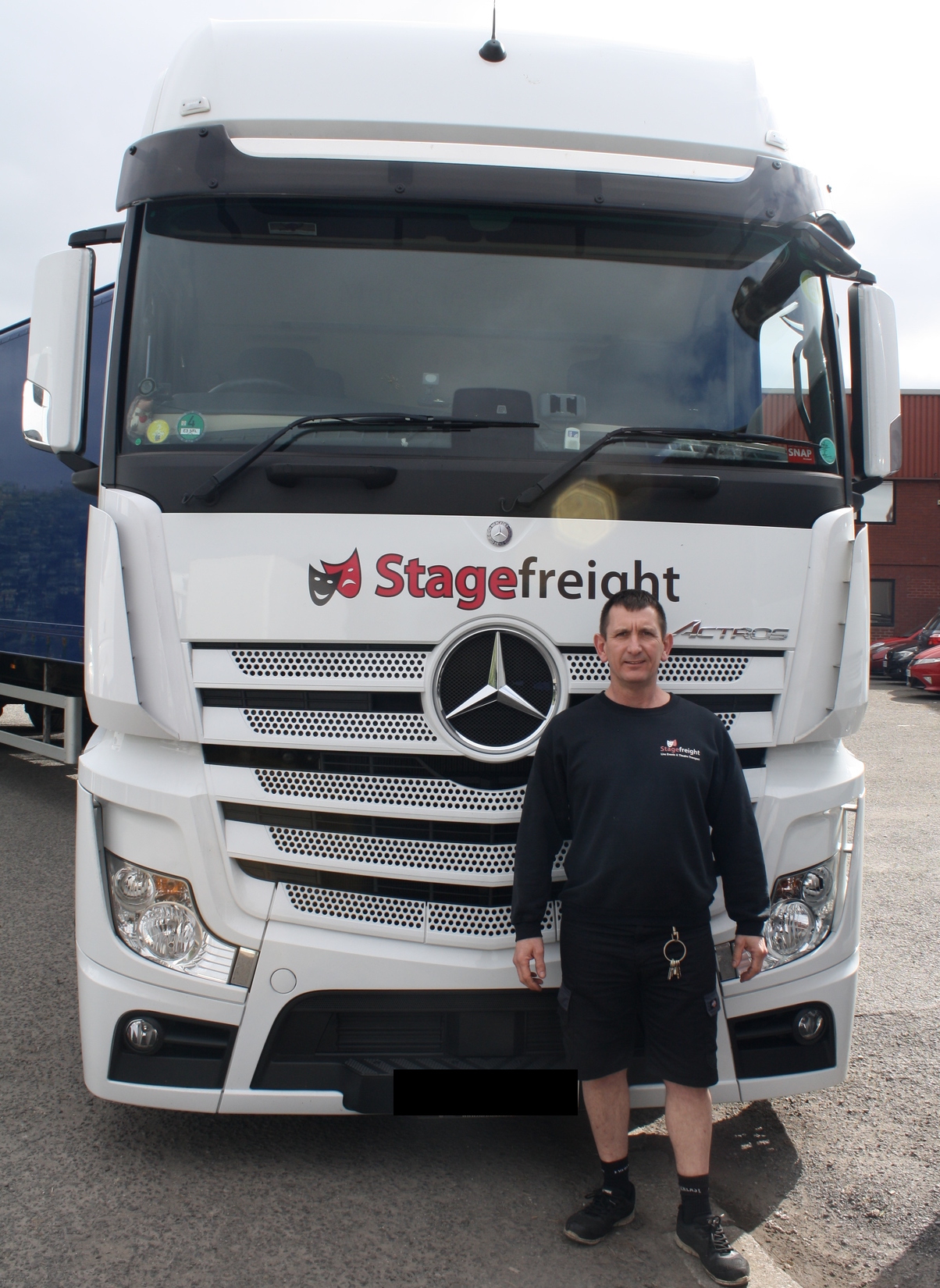 But if he had to choose (and let’s face it, I specifically asked him to do just that), his favourite venues are in Edinburgh and Canterbury.

He likes Edinburgh due to the style of loading bays and he likes the challenge of Canterbury.

As Canterbury has a medieval style centre, driving in this cathedral city requires some good skills.

Edinburgh is not only a good venue, but has a great crew too who are really fast when it comes to unloading and loading.

Paul is currently on tour with English National Ballet’s “She Persisted” – one show with three bold works on and by women.

Paul’s advice to young or new drivers is to never underestimate the focus you need when driving.

Always take your time and observe. Check and double check when driving. Beware of going into autopilot when on route as anything can happen.

Ash joined the Stagefreight team back in 2018 as a sub and became a full-time driver in May 2019.

He’s been driving for over 17 years and was previously driving across the UK in the general haulage and recycling sectors.

Ash has been getting stuck in across a variety of event transport jobs including music, theatre and corporate. 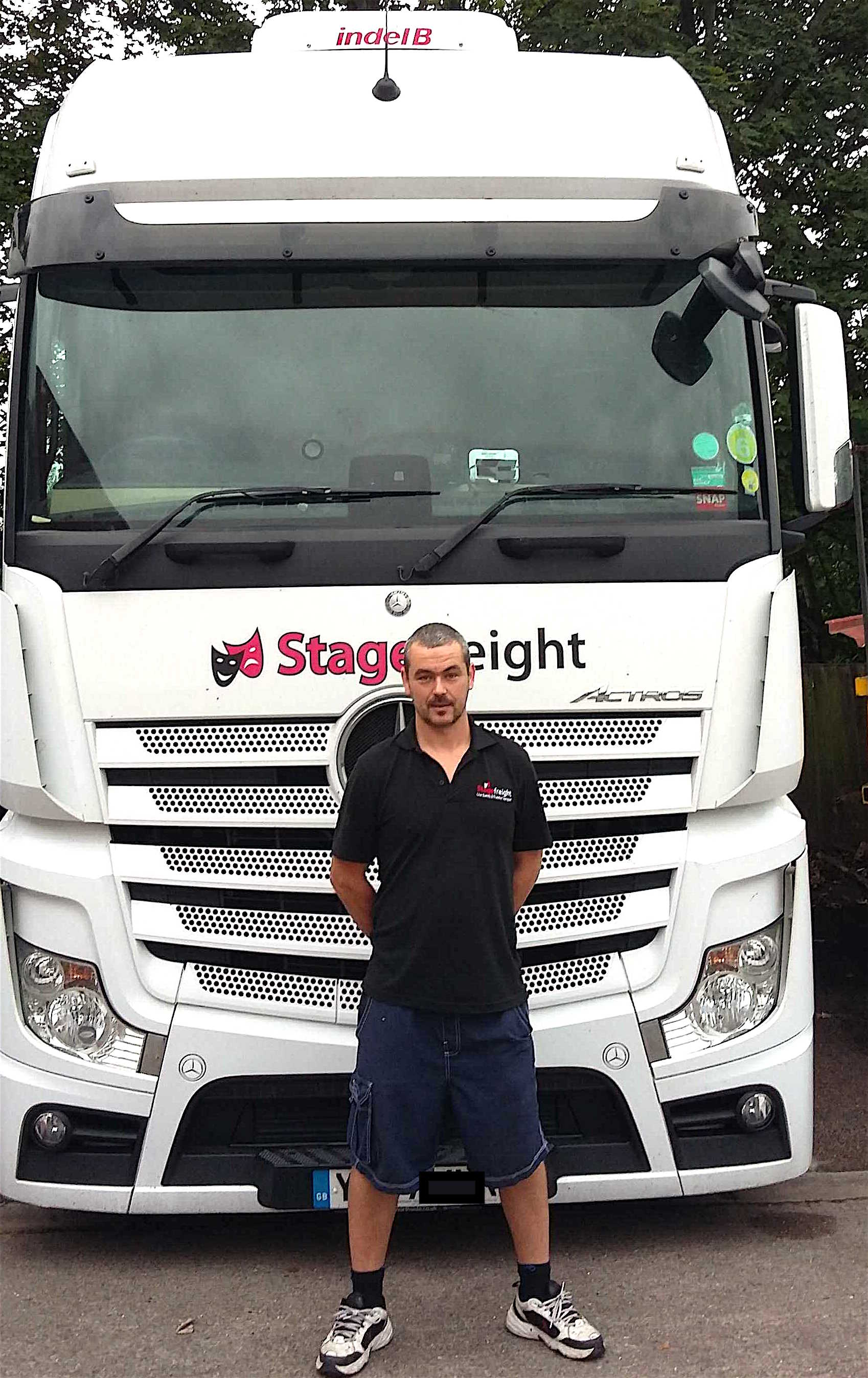 Being part of a 20 truck convoy across Europe was an eye-opener and quite a highlight for Ash, especially Russia and the Ukraine.

Previously Ash had mainly been to Iraq and Afghanistan as a driver in the army, so this tour offered more countries to add to the list.

The band Ash was doing the music transport for is up there as one of the music legends. Despite being in their 70s, they still know how to rock!

Ash’s advice to young drivers is to always listen. If you listen to the task and what you’ve been asked to do you can’t go wrong.

Ask for clarification if need be, but if you do as you’re asked you’re offering great customer service.

And if you’re keen to get on the road as a driver yourself, get in touch to enquire about our latest vacancies.

If you’re in the entertainment business yourself and you need a reliable transport expert, we could be just the ticket.

The Most Popular Corporate Event and Conference Venues of Europe

Travel Events and Shows of Europe 2019