BBC Leeds Came Behind The Scenes

We’re very excited as Richard Stead from BBC Radio Leeds came for a visit to do a Behind the Scenes feature.

No worries, if you missed it on the radio, as you can catch the footage on the BBC iPlayer at the 2 hours and 11 minutes mark. 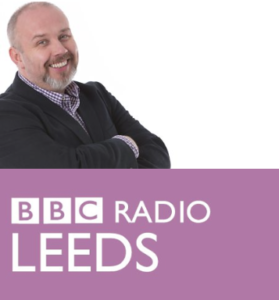 Richard also filmed some scenes to spread the word on Twitter and here’s one of the Digi Videos. 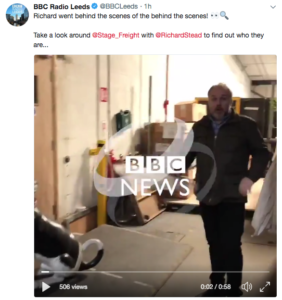 It was great to show Richard and his producer, Jamie, what the team gets up to.

We started by giving them a tour of the Stagefreight warehouse, showed them the yard and some of our stage trucks.

And they were surprised by how much planning is needed to get one of our event partner’s shows on the road.

Behind the scenes eye opener

From our point of view, it was fascinating to see Richard and Jamie in action as they planned out the interview with Ian and the different sections of the show.

Head over to the BBC iPlayer to listen to the whole thing, as I don’t want to be giving too much away.

All I’ll say is there’s a Rhino, an old taxi and Ian from Stagefreight doing a fab job in his first radio interview.